Although cannabis has been used for thousands of years for food, medicine, textiles, and its intoxicating properties, it seems only in recent history that cannabinoids (sans THC) and terpenes have received global attention for their therapeutic properties. And why is that? If CBD is this magical compound that is all-healing, why have we only recently heard about it?

The Illegality of Cannabis

Harry J. Anslinger was a government official for the United States. He savagely supported prohibition and the criminalization of drugs and is often credited for establishing not only America’s drug policies but also the policies of other influential nations. 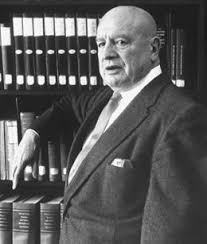 In 1930, he served as the very first commissioner of the Treasury’s Federal Bureau of Narcotics and held the position for an unprecedented thirty-two years. Although the Treasury pursued the illegal trade of alcohol and illicit drugs, their motivation was not for public safety, but rather for the loss of untaxed income.

To ensure job security, Anslinger needed a new substance to demonize, which led to his collection of questionable evidence depicting marijuana as a root cause for crime and violence, specifically committed by Mexicans and the black community.

Anslinger’s attack on marijuana became even more impassioned through mass media, as he described the plant as a “deadly, dreadful poison that racks and tears not only the body but the very heart and soul of every human being who once becomes a slave to it…” Anslinger’s determined denigration of marijuana moved from the state level to a national movement, further supported by what he called the “Gore Files”, which were a collection of quotes from police reports, graphically illustrating 200 crimes committed by drug users. 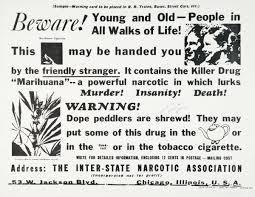 However, researchers have now proven 198 of the 200 crimes were wrongly attributed to cannabis, and the remaining two could not be disproven, only because there were no records that those crimes were ever committed.

Anslinger’s pursuit to vilify cannabis succeeded by 1937 when Congress passed the Marihuana Tax Act. The American Medical Association (AMA) strongly opposed the act because the tax was placed upon the physicians prescribing cannabis, the pharmacists selling cannabis, and the cultivators/manufacturers of cannabis.

The AMA opposition was based on the grounds that there was no evidence proving marijuana led to addiction, violence, or overdoses. They further argued that because marijuana was an unknown term of the time, the medical profession at large was unaware they were losing access to cannabis. Moreover, the AMA stated this bill had been created in secret, without allotting the necessary time for an opposition bill.

Despite the AMA’s protests, the bill passed, affecting not only the distribution and cultivation of marijuana but also of hemp, by association. Shortly thereafter, mandatory minimum sentencing laws were enforced, resulting in first-time offenders (most often people of color) serving between two and ten years in prison.

By the 1940s, scientists had disproven Anslinger’s theories and unequivocally confirmed there was no correlation between marijuana and crime, violence, or insanity. Regardless, by 1970, cannabis was officially outlawed for medical or recreational use with the passage of the Controlled Substance Act, which stated marijuana (along with other drugs like heroin and mescaline) had a high potential for abuse, with no medicinal purpose. 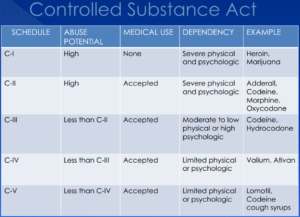 In the 1970s, a bipartisan commission recommended Nixon decriminalize marijuana, to which Nixon responded with the War on Drugs – a global campaign led by the United States government of drug prohibition and military intervention to reduce the illegal drug trade in the United States.

Nixon’s Domestic Affairs Advisor, John Ehrlichman, was later quoted, “The Nixon campaign in 1968, and the Nixon White House after that, had two enemies: the antiwar left and black people…We knew we couldn’t make it illegal to be either against the war or black, but by getting the public to associate the hippies with marijuana and blacks with heroin, and then criminalizing both heavily, we could disrupt those communities. We could arrest their leaders, raid their homes, break up their meetings, and vilify them night after night on the evening news. Did we know we were lying about the drugs? Of course, we did.”

This groundless attack on cannabis for these last hundred years has devastated families and communities through the blind incarceration of the very people our government was claiming to protect. That alone is unforgivable. But these laws also prevented the necessary research on the medicinal benefits of cannabis, which is why the healing properties of CBD have only recently been discussed on a national level.

As we previously stated, CBD is a cannabinoid produced by both the hemp and marijuana plant. It is non-intoxicating, meaning CBD on its own will not cause the sensation of feeling “high” or “stoned”. As we are often asked, “Does CBD get you high?”, we say again – no. CBD will not result in being “high” or “stoned”. There are, however, over 3,000 scholarly articles on the medicinal benefits of CBD, most often surrounding its anti-inflammatory, analgesic, anti-anxiety, and antioxidant properties.

Does CBD Show Up On A Drug Test?

There are over 100 different cannabinoids found in the cannabis plant, all of which provide their own medicinal benefit. If a drug test is performed, and someone tests positive for marijuana, what they are actually testing positive for is the psychoactive cannabinoid, tetrahydrocannabinol, which is more commonly known as THC. There is currently no known test for CBD or any of the other minor cannabinoids. That being said, if you are using a CBD product, where a high percentage of THC is present, you can absolutely fail a drug test. If your career or scholarship is dependent upon you passing a drug test, here is what you need to know.

The legal limit of THC that can be present in a hemp-derived CBD product is 0.3% or less. By comparison, most marijuana flower has a minimum of 15% THC. So, although you will not feel “stoned” when consuming a product with 0.3% THC or less, depending on how your body metabolizes cannabinoids and how much of the product you are consuming, you can still potentially fail a drug test. If you cannot have even trace amounts of THC in your system, we recommend using either a broad-spectrum product or a product made with CBD-isolate. 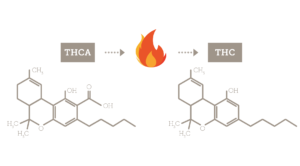 Many cultivators will advertise their smokable flower or concentrated oil is below the legal limit of 0.3% THC, which is pretty misleading. In these instances, you must also examine the percentage of THCA. If you are consuming smokable flower or concentrated vape oils, you need to know both the percentage of THC and THCA, and that’s because when THCA is introduced to heat, it converts to THC. So, if a flower tests with 0.3% THC and 10% THCA, when you smoke it, you are now consuming 10.3% THC, which will absolutely result in a failed drug test.

How Long Does CBD Stay In Your System?

How often you need to take CBD for a particular ailment is dependent upon how your body metabolizes cannabinoids, the concentration of the product you are using, the frequency you are taking it, and the severity of the issue you are trying to treat. As such, there is a bit of guesswork in the beginning as you establish your personalized dose. For some, a dose of CBD can last anywhere between 4-6 hours. For others who metabolize CBD more slowly, it can last for anywhere between 8-10 hours. We always recommend that you “start low, and go slow”, as you can always take more CBD, but you cannot take less.

There are countless anecdotal reports on the benefits of CBD, and we’ve previously discussed in greater detail exactly how CBD works. CBD is a powerful, all-natural combatant against pain, inflammation, anxiety, and stress, but just as with any medicine (plant-based or otherwise), whether or not it works is dependent upon the concentration of the dose, the severity of the issue, and the duration of use. If you are consuming a diluted product, you cannot expect relief from your symptoms. If you suffer from debilitating anxiety or pain, and you take CBD one time, you cannot expect to be “healed”. To assess whether CBD is right for you, you need to ensure you are consistently using a quality product, for a reasonable duration of time. 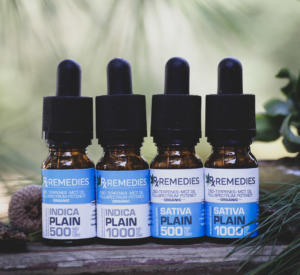 Is CBD A Drug? What Happens If You Take CBD Every Day?

CBD is a single compound derived from the cannabis plant. To date, the FDA has approved only one prescription drug using CBD. So although some could say the FDA has confirmed that CBD by association, the FDA has not yet confirmed all CBD products are drugs. The World Health Association states CBD is non-addictive, has no withdrawal symptoms, and has a great safety profile. Although CBD does interact with some medications, for most people, consistent daily use is completely harmless.

Every mammal has an endocannabinoid system (ECS), which is a collection of receptors found throughout the body that interact with cannabinoids. CBD works for dogs, cats, and any other mammal in the exact same way that it works for people. If your dog or cat suffers from pain, inflammation, anxiety, or stress, CBD can absolutely help relieve those symptoms.

For more questions or comments regarding CBD, please contact us at [email protected]